The Parallels Between Journalism And Digital Marketing When I first enrolled in a master’s of arts in journalism program in 2008, I didn’t know exactly what I wanted to do with my career. I went into the program with an interest in storytelling, media and communication. I knew that I wanted to spend time in the journalism field itself, but that I was also interested in crafting messages on behalf of brands and businesses. All content must be held to a high standard, but good, clear writing takes time, thought and a great deal of effort. Online content is striving to be great, and some of it is reaching that goal, but there are some important lessons in journalism that can help in that effort.

Google’s Panda algorithm was introduced in 2011 to weed out websites that were throwing keywords and scattered content at a page and hoping to rank higher. The search engine recognized that some sites were ranking high in a search by exploiting black-hat practices and lazy loopholes without actually providing anything of benefit to the the user. So Google introduced new standards, and content across the web rose to the occasion. But there’s still room to climb higher and produce content that is even more polished, informative, clearly written and interesting.

Content marketers are embracing the lessons of journalism in part because many trained journalists do make the move to the marketing world, and they bring their knowledge with them. Many of my classmates and I eventually migrated from journalism to marketing, particularly because part way through our one-year school program, the economy collapsed, and the already ailing journalism industry became increasingly anemic.

My classmates and I tried not to get discouraged. We found internships and jobs in journalism, blogging, PR, marketing, communications, and other less direct paths. But whatever direction we took, the lessons we learned about writing still hold true and will always be useful. We learned to convey useful and interesting information, to craft that information in a compelling way, and to deliver a clear message.

Don’t bury the lead. In a news story about a shooting, for example, the lead would most likely be the sentence that tells you the victim’s condition—critical, deceased, and so on. But, in this particular shooting, if there were an even more newsworthy element to the story, like the alleged shooter also happened to be a Hollywood celebrity, that would become the lead. Burying the lead would mean going into detail about the scene, the witness reactions and any other supporting information, before finally really getting to the most crucial point that readers want to know.

In content marketing, the lead may not be quite as obvious, but it’s equally important to get to the point in a concise and efficient way. Whether it’s a blog post, a resource guide, a white paper, or an infographic, the central purpose of the content should be clearly stated at the top of the page, and the rest of the content should always be threaded back to that main focused point.

Stay Focused on your Message

Avoid tangents. Within a piece of content, every phrase, word, and idea should serve the central point. The writing guide The Elements of Style, by William Strunk Jr. and E.B. White says it best: “The surest way to arouse and hold the reader’s attention is by being specific, definite and concrete.”

Clarity of your Message

A writer who is just starting out might think the most important skill to develop in writing is to sound clever, to write with great style and to inject an impressive vocabulary. But like any craft, a person must first learn the building blocks before bring their own style to their work. Clarity is one of most of the most difficult elements of writing, but it is the most important. “A clear sentence is no accident,” wrote William Zinsser in his celebrated book On Writing Well. “Very few sentences come out right the first time, or even the third time … If you find that writing is hard, it’s because it is hard.”

Write in an Accessible Tone of Voice

Drawing visitors to your site, keeping them interested long enough to prevent them from bouncing to one of your competitor’s site, and compelling them to convert, that’s all quite a lot to ask of a busy person quickly scanning the web. But it can be done. Don’t confuse your visitors with industry jargon, and don’t bore your visitors by trying to sound rigidly formal and dry. The famed advertising executive famously said: “Write the way you talk. Naturally.” 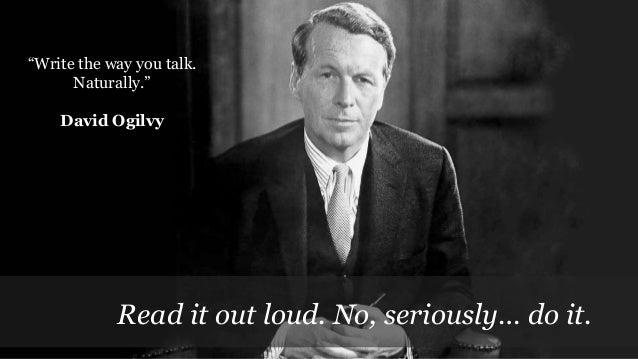 But keep in mind that strong writing doesn’t need to rely on excess punctuation or adjectives—falling back on those accessories is just lazy. And readers will pick up on that. They’ll see right through it and you’ll lose their trust. On that note, I’ll leave you with a great quote from the always clever Mark Twain:

Emily is a writer and editor with a background in journalism, including magazines, web content and infographics. Her writing has been published in Maclean's, Canadian Living and in CBC blogs, among others.

By Emily Burke
Read all 33 posts
Emily is a writer and editor with a background in journalism, including magazines, web content and infographics. Her writing has been published in Maclean's, Canadian Living and in CBC blogs, among others.
Post a Comment
Cancel Reply

The Parallels Between Journalism And Digital Marketing